Peaky Blinders is a TV show that is filmed in the UK & tells the story of the Shelby family’s street gang that roots in Birmingham & that was active in the early 20th century (from 1919 to 1929).
On May 5, 2018, the creator of Peaky Blinders told us that they would make season 6 of the TV series – & we all expect to see it airing in 2021 (depends on how exactly big correctives the Pandemics will do).
Let’s find out more about Peaky Blinders & their style of clothes, which made them so popular in the UK & across the world.

The mentioned TV series is loosely based on the story of the real street mob named Peaky Blinders that has been operating from the 1890s to 1920s. They exploited such criminal activities as assault, bookmaking, bribery, extortion, fencing, fraud, hijacking, hooliganism, murder, robbery & smuggling, at the peak having circa 50,000 members. In the TV show, the mob is headed by a cunning boss Tommy Shelby (portrayed by Cillian Murphy). He has an older brother Arthur Shelby (portrayed by Paul Anderson), which takes the secondary role in the family’s ‘business’.

The distinctive feature & the reason for everyone’s admiration is the way the members of the mob dress: they have chosen to differentiate from all other gangs & to be opposed to higher class by wearing clothes of sartorial elegance, which still make them be connected to the working class they are from. All members of the mob were easily recognizable by other members, people of slums & fancier neighborhoods (where they were making their activity), the officials & officers of the police thanks to what they wear.

Peaky Blinders suits were two-piece or 3-piece ones made of simple & durable materials like tweed or linen. Today, the line of Peaky Blinders suits is supplemented by additional two types of materials fitting today’s requirements for fashion: wool & viscose + polyester. All three types of length can be met in the series:

As for the colors, you can buy Peaky Blinders suits from our catalog in the variety of them: wine, tan, rust, plum, olive, oak & oak brown, Navy & Navy blue, light blue, gray, cream, charcoal, camel, burgundy, brown, blue & black. That circumstance differs modern-days’ Peaky Blinders suits from the ones that the original mob of the early 1900s had: colors they picked were deliberately darker & much more monochrome. Below, we’re exploring reasons.

Peaky Blinders mob throughout the entire activity has been choosing to underscore their firm connection with their origin: Birmingham’s slums and people living there. Thus, even wealthier and most influential mobsters (Thomas Gilbert, David Taylor, Earnest Haynes, Harry Fowles & Stephen McNickle – the real people) that had similar income & level of wealth to affluent people of their time, have decided to wear darker clothes & 8-panel or otherwise tailored newsboy caps (latter is a ubiquitous sign of their mob). As industrial towns of that time (Birmingham, too) were covered grime-and-soot, it had to be impossible to keep clean-and-neat clothes, so all mob members stuck to the style of clothes that was darker & as monochrome as possible. Only white (or close to white) things they had were their shirts. Wealthier members in their hierarchy also wore silk scarves or, in their absence, a tie or a bow tie. Some, however, did not have any neckwear or didn’t wear it sometimes – & that gave a touch of casualness (although in modern times, it seems impossible to wear a Peaky Blinders suit & not wear any neckwear, as it makes one look foolish, not casual).

In contrast to real suits of Peaky Blinders, pieces worn by the heroes of this TV show are somewhat lighter & less monochrome – probably, to underscore high social position yet representing an authentic style of those decades. They still employ obscure, thick & unsophisticated clothes aimed to reflect the working-class’ realities – then men had only a few outfits, 1 overcoat & 1 pair of shoes. This makes them subversively class-conscious yet differing with their easily recognizable hats & nicer (not fancier, though) cloth their apparel was made of.

The main colors of suits that we see on the TV show are brown, blue, gray & black. From season 1 to season 5, you can see as the suits of main heroes evolve, though. When we look at Tommy Shelby, we see that he:

Peaky Blinders suit: what are other pieces of clothing that complete the image

In addition to Peaky Blinders suit, the mobsters also wear these items of apparel to complete their image:

Peaky Blinders suit: what are the differences between the Shelby Brothers?

Arthur Shelby’s manner to wear gowns makes him underline his subordination to Tom (yet, he is an older brother). This is mainly done by a light-headed bow tie – he is nearly the only person in this TV show always wearing it. His finely made bow tie says these about his character: childish, less clever & more reckless.

His younger brother Tommy typically wears overcoat having a black velvet half-collar (in addition to worn Peaky Blinders suit), which no other character does in the series. This is to swiftly highlight his top position in their mob. Yet, this is often understood without words but with pure actions & the way as he positions himself. 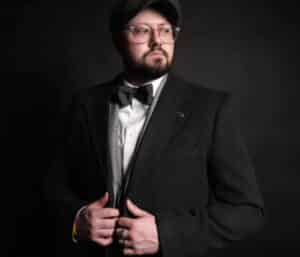 Peaky Blinders suit: a guide to how to dress as characters of the show

The entire idea of wearing Peaky Blinders suits in the TV show was to underline their working-class (and un-stylish) look. However, all clothes they wore are perfectly wearable today. The only thing that was significantly changed in the show compared to real-life Peaky Blinders suit is that real ones wore bell-bottom trousers, which today don’t look neat & stylish anymore (they had their high practicality in running, though).

To look like a real Peaky Blinders’ character, try wearing this combination: