You may know that Peaky Blinders cap is strongly associated with street gangsters and mobsters in England – even without watching the popular TV show of the same name. But it is the TV show that made Peaky Blinders cap popular today, adding to it some romanticism, not the influence of real-life mobsters who used to wear it. Let’s consider now the reasons for its popularity, where it came from, and why it is this hat, not another. 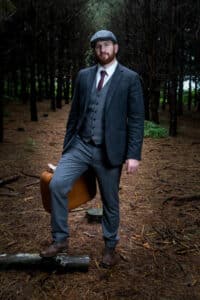 This story is loosely based on the real-life street gang Peaky Blinders, which has been operating in Birmingham in the 1900s-1920s and that was well distinguished for its fashionista style of clothes, which made them easily recognizable in a that-day environment of mostly poor clothes.

The story of the TV series aside (you can read more in the description of the section for Peaky Blinders suits), it is the hat, which really makes the style to differ from the appearance that the rest of fashionable outfit creates. With a Peaky Blinders cap, the position of a mobster in underlined socially, visually, and easily. Without a hat, the general look would be defined as ‘refined’, which is pretty wearable even today, even by a gentleman. With a hat, however, the image skews into a much simpler, which is closer to plain people of the streets, much ruder, even opposed to rich guys wearing cylinders – that is exactly what gang members of that time wanted to say.

Today, there is more than just one name for this hat. They are also named ‘Shelby Cap’, ‘Newsboy cap’, or a ‘Baker boy cap’.

Peaky Blinders cap: the story behind the hat

Some people say that the Peaky Blinders cap was a tool for blinding people in the days when it originated. As if two safety razors were sewn into the top of the hat and when a person wearing this hat has beaten anyone with his head, he’d likely to point to the eyes so to make those razors blind that guy once and for all with a rigid hit.

This theory, however, is an urban legend. And the explanation of hoax is based on the fact that safety razors that were able to do so only appeared several years after Peaky Blinders caps have actually become trendy and widespread. Also, even if any mobster would want to use them for blinding, the cost of first safety razors on the market was so high that mobsters wouldn’t allow to buy them.

Considering the most probable version of the origin of the term Peaky Blinders, it is as follows. Mobsters have decided to differentiate selves from others with caps having a recognizable form. These hats had buttoned or otherwise pointed-up peaks on their tops, which are easily seen in pictures of real-life mobsters or ones you see on a TV. As for ‘blinder’, it is believed that mobsters, by attacking their victims from the back, often drew their own hats from heads and put them swiftly with a hand to a victim’s face to temporarily blind them. This is not only to disorient and scare a victim but also to make sure that he or she won’t recognize a mobster’s face on a trial if any. In a prevailing number of cases, a victim was robbed using Peaky Blinders cap but wasn’t deprived of vision in the result of an assault – unless it was a strong reason to do so (because making a felony wasn’t a plan of a gangster, they were only robbing, not mutilating, passersby people). 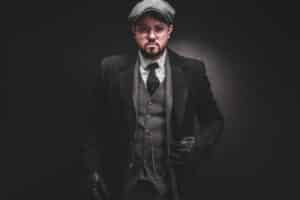 Peaky Blinders cap: how is it made?

An ordinary Peaky Blinders cap is made of:

Also, one may find another type of this hat, which we’ve mentioned a few paragraphs above: Baker Boy Cap. This is another form of the Peaky Blinders hat, which is made of one, two, or three pieces of cloth, sewn in a way to make a top (flatter, though), and a round-formed lower side, which is in the contact with the head. This is also a topped hat but without that streamlined button-top, which is more characteristic for this headgear.

No matter what is the way of sewing it, there is always an ending made of cloth in the inner side of the headdress, knocked up, which is designed to fully grasp the head and let the hat sit on it tightly. Also, it prevents from cold going underneath the cap and from sweat to be pouring on eyes when it’s hot.

Peaky Blinders cap: what is it like in other countries?

In some countries, others that the UK, nearly the same or similar cap is also an attribute of a street mobster. It is usually a man (rarer – a woman) with low intellectual abilities, not willing to study and self-perfect, who has decided to earn for living with small wrongdoings, which are too small to be a felony (that is, a criminal offense) but quite enough to raise some dough for more or less passable living. This life is saturated with different risks and harshness, and a person deciding to live like that, more often than not, understands it.

The roots of this kind of hat go to prison style. There, a lot of underdogs dwell, who, naturally, don’t have too much money. But as they still need protection from rain, sun, and winds, the cap that they wore, turned out to be simple, cheap, and effective. It covered head effectively and could be taken off easily, with one hand’s move. Also, its form announced the opposition to a cylinder hat, which only rich men wore. In addition, a Peaky Blinders cap or another hat of this kind could be easily twisted into the tube and held in one hand or put into a pocket when unnecessary at the moment. These factors make a Peaky Blinders cap to be an elegant element of the apparel of class of thieves and wrongdoers.

By the way – do you remember the film ‘Gangs of New York’ (2002), with Leonardo DiCaprio and Cameron Diaz as the main cast? This film also depicts gangs and their life but the action takes place in New York in the period of the 1860s. The main antagonist of the film William “Bill the Butcher” Cutting, which is based on the real-life mobster William Poole (depicted by Daniel Day-Lewis) is also a fashionista but he wears a cylinder – underscoring his ardent desire to be a top-class gentleman, whilst still holding a gangster ‘business’ as a heart of his prosperity. He wanted to flow away from the dirt and lows of people around, which he really didn’t care about. Also, he did not urge other his gangsters to wear as he did – to visually stand away from them. Thus, we see two different approaches to fashion in the criminal area and we, frankly, love the Peaky Blinders way more than another.

Peaky Blinders cap: how to wear?

It is advisable to wear a hat (to create a holistic look) with other Peaky Blinders clothes, namely, with a three-piece suit. The original style of clothes is more monochromatic and calm in colors. Thus, under the neck, you will look like a refined gentleman, but the head will make you look like a roughneck or redneck (which is often the same).

Remember that the color match of Peaky Blinders cap is important: you shan’t wear your cap if it won’t match the color gamut of your style.

Also remember that wearing Peaky Blinders cap, you loudly proclaim your simple roots and straightness of your lifestyle. It may often oppose to abiding the law or, if you’re not that dangerous kind of a guy, it will say about your power, freedom, and the desire to underscore your uniqueness.