You may often hear as sellers, manufacturers, and users interchangeably use such notions as suit jackets, men’s blazer jackets, and sports jackets. But is it really true to mix them? And, if not, what is the difference amongst them? Let’s figure out! 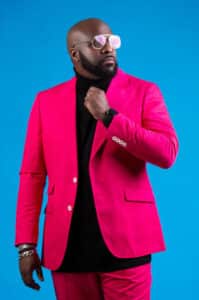 It eventually takes a position in between solidly formal suit and regular casual style, thus, it may be used to make a smart casual or to be in line with it but representing own style, which is wearable for formal and informal meetings and other events, including work and off-work ones.

This type of jacket is usually made with brass or copper buttons, which are positioned in one row on both sleeves (an inch or more from the lower end of it). The main buttons located on the belly are also made of the same metal. Men’s blazer jackets are often made of solid materials of navy or other dark hues to underline their connection with naval forces and sportsmen, who made this type of garment particularly popular.

It must be mentioned that today both genders wear blazer jackets and, of course, in women’s fashion, there are many more instances of them than in men’s fashion.

Men’s blazer jackets were first used by the Lady Margaret Boat Club in 1825, the rowing club of Saint John’s College of Cambridge. The team uniform they wore had a passionate red color, which was as if blazing with fire on their bodies, which’s why the term ‘blazers’ took off.

After it became popular, other sports teams started to wear differently-colored blazers of the same or near the same cut, spawning off the popularity of this garment first throughout the country (it happened by the late 1880s) and then amongst other countries of the world. Particular popularity in the UK men’s blazer jackets received in the 1960s due to the popularity of various famous music bands, which wore them on the scene, and that fashion was continuously spreading since then. In women, this garment received wide recognition in the 2000s. 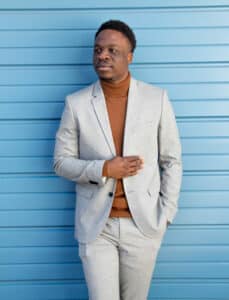 Men’s blazer jackets: what you should know about them?

Knowing the differences of a blazer from other types of jackets may save you from wardrobe’s mashups, which, in some groups of people, may embarrass you. This is practically relevant when you’re thinking about wearing one of your men’s blazer jackets, which are tailored to give a nice fit to your body, with a sweater (which is not desirable, putting it softly).

You also don’t want to wear something sports-like to a very formal event or a dinner if you only don’t want to underline your exceptional wealth coupled with light attitude to an existing problem that you are going to solve during that meeting. Appearing on a formal event wearing a men’s blazer jacket is only acceptable if other participants will dress the same, as right after it, you, without changing clothes, going to the sea, going to visit some sports event, or throwing a party.

A sports jacket is much less structured and visibly less formal. Decades ago, you could go hunting wearing one of these. Or if you had a morning meeting, which is always informal (as it is arranged in the morning, come on!), you can wear a sports jacket. Men’s blazer jackets, however, are more formal and are presentable for mid-day or evening meetings, as well as they are wearable on a job if only the less formal style is acceptable there. Such apparel is to make you and everyone feel more comfortable whilst still making it possible to solve the same-level issues as you would wearing the most formal suit you have. This garment is able to stress out your practicality yet adherence to much lesser formality in solving questions and running your business. This can also characterize you as a modern man, who values own time and wants to be effective over being too scrupulous.

The key characteristics of blazer jackets are:

If you think of owing only one blazer, then make it in classic navy blue color and in the as classic cut as possible. 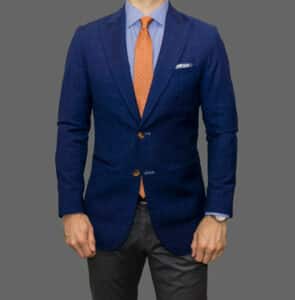 Men’s blazer jackets: materials and colors that we have

The list of materials we have men’s blazer jackets made of is as follows:

There are only two types of fits that doable in this garment: slim fit and tailored fit (this is dictated by their nature). As for the sizes, we have all, from 34 to 52, and from S to 3XL. As for colors – we don’t stick just to traditional ones, as we completely understand the needs of our clients and their diversity, so you can find in our catalog wine, white, tan, red, purple, oak, navy, multicolor, mulberry, grey, cream, charcoal, brown, blue, black-gold, black-blue, and black colors of jackets.

It would be a good solution to pair your men’s blazer jackets with denim, chinos, or even khaki-style trousers – to make it a completely free look. For an office style, however, buy a 2-piece or 3-piece suit. Consider that your waistcoat shall not interfere with the look of your jacket – not to protrude from above the chest buttons of the jacket. If it does, however, it should complete the look, not interfere with it – to create the angled composition with 1 button of a waistcoat shown above the upper button of a jacket. Otherwise, if those conditions aren’t met, simply reject the waistcoat.

A tie or bow both can be paired with your formal suit. Independently of jacket’s lower formality, we recommend you to pick a tie following the same formal rules of its kind and color combination with your suit. For instance, a wonderful image can be created with a navy-blue suit, a shirt with a hint of blue, and a classic red tie, with the entire image being completed by shiny Oxfords.

When creating a formal look with this type of jacket, make sure to pick trousers made of the same style, color, and type of fabrics, otherwise, it might look sloven or showing your bad taste (even the 1-tone hue variation can spoil the entire image).

Last but not least – this type of jacket will not hide your physically imperfect belly as a more formal suit would due to fit styling. Pick it only if you are to underline your waist slimness – do remember that this jacket is a direct outcome of the sports guys who used to wear it near two centuries ago.